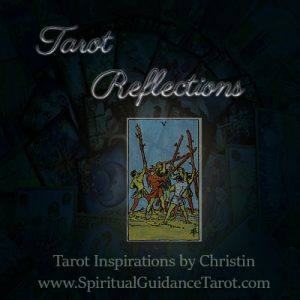 This card depicts a group of men, all armed with staffs fighting among themselves.

These fellows all so caught up in defending their own positions that nothing is getting accomplished. Perhaps if one of them puts down his staff and calls the group to order some diplomatic resolution can be reached.

When these guys are so busy fighting they don’t make any progress. So it is in life, we often get so caught up in the need to feel justified or to be right, that we don’t take the time to walk a mile in the other person’s shoes.

Another aspect to this card are the struggles within, and the ways in which we fight against our true nature, resist change, talk ourselves down etc.

Conflict resolution starts with a willingness to put ego aside, whether this be within yourself with conflicting thoughts or the inner critic, or without, among a group of peers or family. In doing so, you become the person who empowers, allowing all sides to be fully expressed so that a workable solution might be reached.